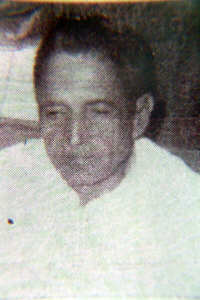 Daulatram Saharan (??????? ????) (13 January 1924- 2 July 2011) was a parliamentarian and popular peasant leader of Rajasthan in India. He was former central Government Minister. He was a veteran Gandhian leader. He was born in village Dhani Panchera of district Churu in Rajasthan in the family of Dularam of Saran clan Hindu Jat. His mother's name is Bhuri Devi and wife's name is Jadav Devi.

Daulatram Saran got his education from Government High School, Sardarshahar. He was a strong follower of Mahatma Gandhi. He jumped into the freedom movement of India on the call given by Mahatma Gandhi. He decided to wear Gandhi cap in the year 1942 that continued throughout the life. He had always problems of farmers in his mind and struggled for them, due to which he was very popular among the farmers of the region. Daulatram Saran was a very knowledgeable person and a veteran politician. He happens to be a former colleague of the ex-prime minister of India Choudhary Charan Singh. He had been member of a large number of committees, like Rajasthan Assembly Public Accounts Committee, Lok Sabha Public Accounts Committee, Estimates Committee, Home Committee, Government Undertakings Committee, and Works Advisory Committee, etc.

Daulatram Saran was connected with Gramotthan Vidyapith Sangaria, founded by Swami Keshwanand. He was also connected with Girls School Mahajan. He was founder of Gandhi Vidya Mandir Sardarshahar. He is of the view that the cause of social evils is lack of literacy. He did his best efforts for the spread of education through opening of village schools, libraries and adult education centers.

Popular leader of the farmers

Daulatram Saran is the founder Chairman of Rajasthan Kisan Union from 1974. He led the movements of farmers against levy. He united farmers through organizing mass rallies of lacs of farmers in Jaipur. He also organized farmer rallies under the banner of Kisan Unions at District and Tehsil levels. These rallies were very effective and showed the strength of peasantry. These helped to a great extent in awakening the farmers.

Daulatram Saran took up number of reformist actions. He was against child marriage and bonded labour system. He has strongly opposed the Mratyubhauj and extravaganza on deaths. He advocated tree plantations programmes in villages of Thar Desert region to mitigate the effects of extreme temperatures and shifting sand dunes. He believed in the principle of simple living and high thinking. He was one of the rare politicians who advocated simplicity in public and political life.

He had the hobbies of traveling and reading. He practiced yoga and naturopathy. He loved nature.

He died on 2 July 2011 Saturday at Jaipur. He was cremated at his home town in Sardarshahar with full Government honour being a freedom fighter of repute.

Popular Leader Of the Farmers